I changed my mindset from winter to summer a while ago. I want to climb, ride a bike, run etc. Just leave the skis in the corner for some time and take a rest, to get the new inspiration for the next season.

But somehow the winter just doesn’t want to go. And the latest idea which came from Andraz head sounded like this:

It sounded like a great idea and at the end it was, just with a with minor deviations from the original plan.

We took off Friday afternoon, Andraž and Klemen picked me up and we were on our way to Gozd Martuljek where we left one car. The start and the finish weren`t on the same location.

We took the second car to Vrata valley, our next destination, where we parked our car. This was the initial start of our adventure. A nice trail through the woods brought us to a rather ugly torrential path that led us over rocks and scree. Awful way for an ascent. No wonder they say that our mountains are a 90 degree scree.

After an endless ascent we finally reached the bivouac. I thought to myself, never again up or down here. Man was I wrong. We prepared for the night, melted some snow for water and had a supper (I had salmon with rice and green salad :D).

Just before we went to sleep Andraz had a revelation. “I forgot my car keys in the car.” that was all he said. But at the moment there was nothing we could do.

During the night the wind was quite strong, the best moment was when Klemen asked if our skis are safe and the answer he get from me and Andraz was something similar to a yes. The fact was that no one wanted to leave our warm blankets to check. 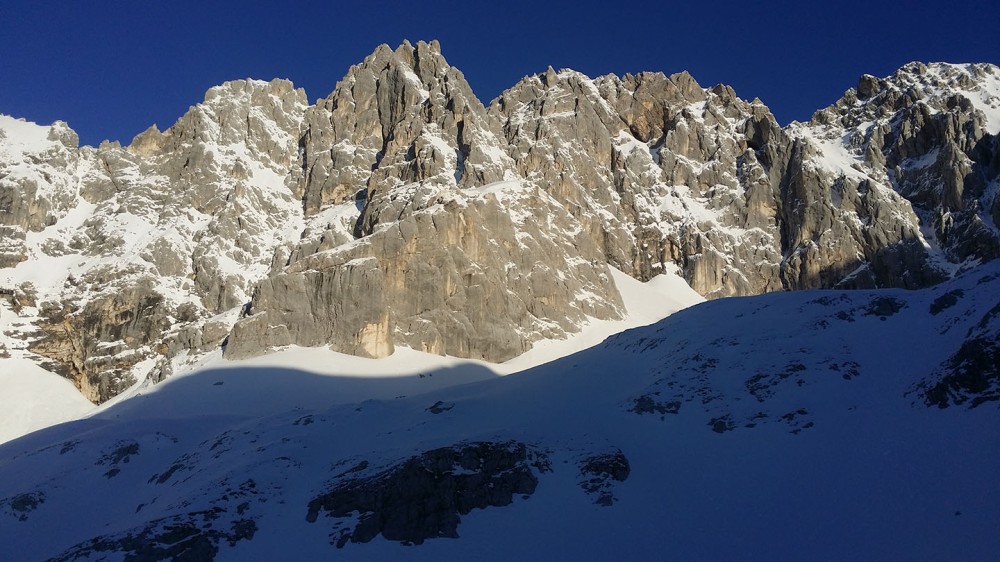 “Morning. It’s 6am and it’s gonna be a beautiful day.“ We started the tour at 7am and in the sun it was already hot. First we started from bivouac 2 in Rokavski ozebnik. Around 45 minutes of uphill walk. First part in the sun and the second part in the shade. Snow in the shade was actually really good, some kind of heavy powder. At the top we had a nice view on Skrlatica, our second stop.

Here the second surprise was lurking. We needed to descent for about 30-40 vertical meters and there was a possibility that we would have to perform a rappelling maneuver and I was without my climbing belt. I had forgotten to ask if I’ll need it and Andraz forgot to tell me that maybe I will need it. We were lucky thou! There was enough snow for a nice descent without any rappelling.

Once we were on the other side we quickly started ascending towards the top of Skrlatica. The sun was already on the slope and chances of spontaneous avalanche were increasing. Knees deep in wet slush, step after step we came closer to the top. When I arrived at the top they already had a snack and 5 minutes later we were on our way down.

A few turns to get used to the snow and the fun started. But it didn’t last long. Because on the low elevation the temperature was much higher and the snow was super sticky. After 5 minutes of skiing we were walking again towards the couloir. The snow was more or less the same except in the shadow. That was the only place where we (I) was able to do a few nice turns. Once we finished we just had to do the final ascent. Again walking uphill to the entrance of Jugova grapa.

30 minutes later we reached the top and with it came the third surprise. While I was preparing for the descent I suddenly realized that I was missing my helmet.

After a short discussion we agreed that I’ll go down to find the helmet and descended into the Vrata valley where the car was parked and drive the second car with the forgotten keys  to Gozd Martuljek. Everything went well except the part of the descent where I had to walk. Like I mentioned at the beginning for the ascent, terrible way to go up. And even worse to go down. Walking with 15 kg on my back down the scree. I was lost at least two times. And so on…

All in all a really nice day, probably the last one in Slovenian mountains… for skiing! To be clear, the climbing season just started. ??